In this opinion piece, James Baldwin makes a cogent, well-reasoned, and passionate argument that Black English, or African American Vernacular English, is a language. Not a dialect, but a language. He begins by chronicling various reasons for languages to arise—the need to describe and control your circumstances, to confront life and outwit death, and, finally, as a proof of power. After establishing these exigences for the creation and use of a language, he transitions to the circumstances of Black Americans. Baldwin quickly turns the tables on white Americans who might argue that Black English is a dialect:

“Now, I do not know what white Americans would sound like if there had never been any black people in the United States, but they would not sound the way they sound. . . . Now, no one can eat his cake, and have it, too, and it is late in the day to attempt to penalize black people for having created a language that permits the nation its only glimpse of reality, a language without which the nation would be even more whipped than it is.”

He goes on to connect the present conditions of Black Americans with the history of slavery, saying that “it is not [Black American’s] language that is despised: It is his experience.” Baldwin unequivocally argues that 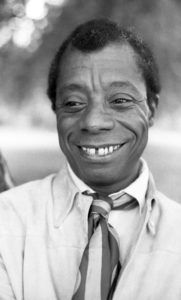 Black English is indeed a language, and counterarguments are rooted in systemic racism. He concludes by arguing that Black Americans must be educated by their own, rather than their oppressors.

This is a polemical essay and many students will react strongly to this piece. Others will argue that this is dated and does not reflect contemporary issues. Admittedly Baldwin was writing in 1979; however, you can easily connect the issues discussed here with current racist rhetoric, violence against Black men in particular, and the Black Lives Matter movement.

In terms of creating a translingual classroom, this will help students to renegotiate their understanding of what “counts as a language” or a valuable system of meaning-making. I usually use this piece after discussing June Jordan’s “Nobody Means More to Me than You and the Future Life of Willie Jordan,” which also argues that Black English is a language. While both Jordan and Baldwin position Black English as a distinct language, which works against translingual notions of language as fluid, influx, and negotiated, these two texts do challenge assumptions about the dominance of standardized English. Baldwin also thoughtfully points out that the English of white Americans draws on, or appropriates, from Black English, meaning that all languages are influx and, in a sense, translingual. I’ve also used this as an example of a well-constructed argument and de-emphasized the actual content of the piece to emphasize Baldwin’s rhetorical moves. If a class is particularly resistant to the idea that Black English is a language and the conversation devolves into a never-ending debate, treating this text as a legitimate argument that does not need debate helps reframe the conversation.