This page provides a more detailed introduction with definitions and key terms, essential reads and scholarship within rhetoric and composition, highlights from other disciplines including sociolinguistics, education, and comparative literature, and a working bibliography providing resources for instructors and writing program administrators. For a broader overview, see the Translingual Overview.

A translingual approach "sees difference in language not as a barrier to overcome or as a problem to manage, but as a resource for producing meaning in writing, speaking, reading, and listening." — Bruce Horner, Min-Zhan Lu, John Trimbur; Jacqueline Jones Royster, “Language Difference in Writing: Toward a Translingual Approach,” 303

A translingual approach to composition is concerned with:

Translingual, Translanguaging, and Translingualism  As discussed above, these terms are still in flux and will remain so. For the purposes of this website, "translingual" refers to an overall orientation or approach to language difference as well as to translingual speakers. "Translanguaging" generally refers to the act of moving between and among languages in a given text and/or encounter. I also argue that translanguaging includes  the act of challenging monolinguistic assumptions of higher education and contextualizing Standard Edited American English as one discourse among many. I believe these two acts of translanguaging work together create a paradigm shift in composition pedagogy and theory. "Translingualism" refers to an instance of moving among languages and/or a state of being translingual.

Translingual versus English as a Second Language (ESL) Rhetoric and composition and English as a Second Language are often separated into two different disciplines. While this split is artificial, it also leads translingual scholarship to be separated from ESL scholarship. However, the idea of "translanguaging" exists in both rhet/comp and ESL. Therefore, it is important to recognize that translingual and ESL scholarship have two different disciplinary histories, but that these difference are not insurmountable. For more about ESL scholarship, you can visit the Teaching English to Speakers of Other Languages website: http://www.tesol.org/

Translingual versus Multilingual The difference between translingual and multilingual is the way these terms reflect assumptions about language use. What distinguishes translingualism from multi/bi/mono-lingualism is the notion of constantly moving between and among languages. Multilingual retains the assumption that languages are distinct and that individuals switch between discourses, rather than cross freely amongst them.

Code-Meshing versus Code-Switching While code-meshing and code-switching are often used interchangeably, they actually denote two different linguistic practices. Code-meshing describes using languages and discourses simultaneously to create meaning. Code-meshing is analogous to "translanguaging." Code-switching describes switching from one discourse to another. That is, individuals use languages or discourses separately. Like "multilingual," "code-switching" implies that languages are distinct and that people can switch between them without having any slippage and/or conflict.

Language Difference in Writing: Toward a Translingual Approach

Published in 2011 by Bruce Horner, Min-Zhan Lu, Jacqueline Jones Royster, and John Trimbur, this opinion piece touched off the discussion of translingual scholarship in rhetoric and composition and remains frequently cited. The article both critiques the emphasis in traditional U.S. composition on linguistic homogeneity (read: "Standard Edited American English") and argues that compositionists should see difference in language not as a barrier to overcome or as a problem to manage, but as a resource for producing meaning in writing, speaking, reading, and listening. 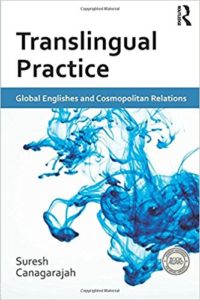 Professing Multiculturalism: The Politics of Style in The Contact Zone

In this seminal piece, Min-Zhan Lu challenged notions of "basic writers" and called on compositionists to reconceptualize "student error" as valid rhetorical choices based on personal language use. Originally published in 1994, this article significantly predates formal translingual scholarship; however, with this publication Lu set a new agenda for writing instructors. She argued that marginalizing student voices pushes their work and the work of their instructors to the margins.  She also provides a detailed example of her approach to non-standardized student writing by discussing her classroom practices in detail. 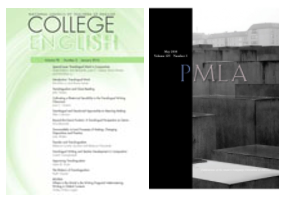 Paul Kei Matsuda's "The Lure of Translingualism" (2014) and Keith Gilyard's "The Rhetoric of Translingualism" (2016) provide thoughtful warnings against uncritical translingual pedagogy and consider implications of widespread adoption of a translingual approach for the field of composition. While Matsuda fears "linguistic tourism" could obscure similarities, Gilyard urges compositionists to avoid collapsing differences and ignoring systematic inequalities. Both help to complicate and deepen a translingual approach to language difference. 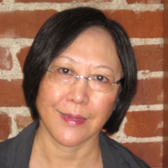 Bruce Horner is the Endowed Chair in Rhetoric and Composition at the University of Louisville. He earned his Ph.D. at the University of Pittsburgh. Along with Min-Zhan Lu, Horner is a major force in translingual scholarship. Together, they have published some of the seminal articles in this subfield. Lu and Horner also published a textbook, Writing Conventions (2008), where they offer a way for teachers to engage students by reflecting on their own experiences writing. Horner's most recent book, Rewriting Composition: Terms of Exchange, was published in 2016. 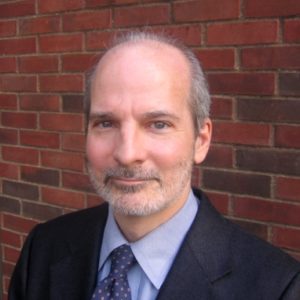 John Trimbur is a professor and associate director of the First-Year Writing Program at Emerson College. He earned his Ph.D at the State University of New York, Buffalo. In addition to translingual theory, he publishes on the politics of language in the United States and South Africa. His article, co-written with Horner, "English Only and U.S. College Composition" (2002). Along with Min-Zhan Lu and Bruce Horner, Trimbur is one of the leading voices on translingual scholarship in rhetoric and composition. 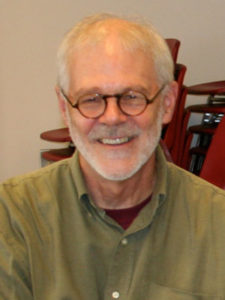 Suresh Canagarajah is the Edwin Erle Sparks Professor of Applied Linguistics, English, and Asian Studies as well as the Director of the Migration Studies Project at Penn State. He was born and educated in Sri Lanka, which he writes about in A Geopolitics of Academic Writing. His other publications include Resisting Linguistic Imperialism in English Teaching, which won MLA's Mina Shaughnessy Award in 2000. Canagarajah provides an interdisciplinary perspective on translingual scholarship by leveraging his expertise in applied linguistics. 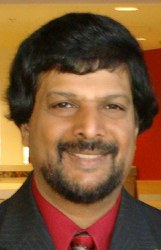 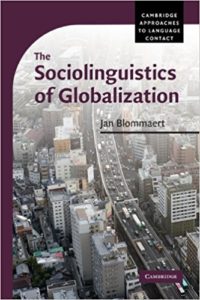 The Sociolinguistics of Globalization

Jan Blommaert, a Belgian sociolinguist and linguistic anthropologist as well as Professor of Language, Culture and Globalization and Director of the Babylon Center at Tilburg University, published The Sociolinguistics of Globalization in 2010. In this book, he constructs a theory of changing language in a changing society, reconsidering locality, repertoires, competence, history, and sociolinguistic inequality. For rhet/comp scholars interested in exploring more about sociolinguistics, this provides a strong introduction.

From the field of comparative literature, Steven G. Kellman, of the University of Texas at San Antonio, brings us The Translingual Imagination (2000). Predating much of the scholarship in rhetoric and composition, Kellman studied the work of translingual writers such as Antin, Beckett, Coetzee, and Nabokov. This book would be of most interest to literature or creative writing instructors who focus on analyzing published work, rather than student writing. Switching Languages: Translingual Writers Reflect on Their Craft (2003) includes reflections from translingual writers including Chinua Achebe, Salman Rushdie, Elias Canetti, and Julia Alvarez and might be more suited to studying writing and linguistic processes. 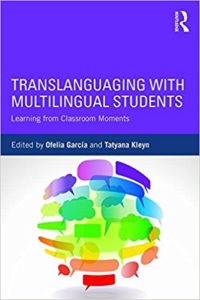 This collection, from the field of education, examines how translingual writing is already occurring in classrooms with "emergent bilinguals" and how to implement a pedagogical orientation. Edited by Ofelia Garcia, professor of Urban Education and Hispanic and Luso-Brazilian literatures at the Graduate Center of SUNY, and Tatyana Kleyn, Associate Professor of Bilingual Education and TESOL programs at CUNY, Translanguaging with Multilingual Students (2016) will be of interest to composition instructors as well as writing program administrators or teacher educators. 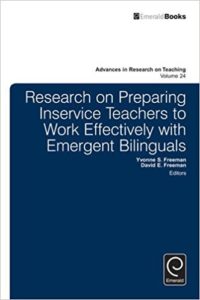 In Research on Preparing Inservice Teachers (2015), Yvonne S. Freeman and David E. Freeman, both from the field of education and emeritus professors from the University of Texas at Brownsville, present research on teacher education for those working with bilingual students. They argue that research on ELL (English Language Learning) students has focused on students themselves rather than their instructors, filling the gap with this book. This would be of particular interest to writing program administrators or teacher educators.