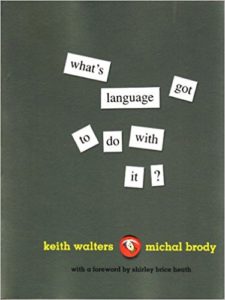 This textbook comes from two applied linguists, Keith Walters of Portland State University and Michal Brody of Sonoma State University, and focuses on linguistic diversity, the politics of language difference, and how language influences identity. I used selections from this textbook in a course about language difference and found them extremely helpful. While the textbook is becoming a little dated at this point (published in 2005), in the current political climate, some political issues such as English only education, fears about voter fraud and suppression, and the oppression of linguistic difference are becoming more and more contentious again.

This textbook includes examples of translingual texts, some of which are included on this site (June Jordan, Amy Tan, and Marjorie Agosin), but it also includes sections about language as argument, issues between language and technology, gender and language, and language and national identities. For translingual purposes, the sections that would be most helpful are “Multilingual USA,” “Talking While Black, ” and “Globalizing English.”

What’s Language Got to Do with It? Edited by Keith Walters and Michal Brody. W.W. Norton and Company, Inc. 2005.

Textbook: What’s Language Got to Do with It?
Tagged on: Academic    Collection    Discourse Community    Education    Linguistics    rhetoric